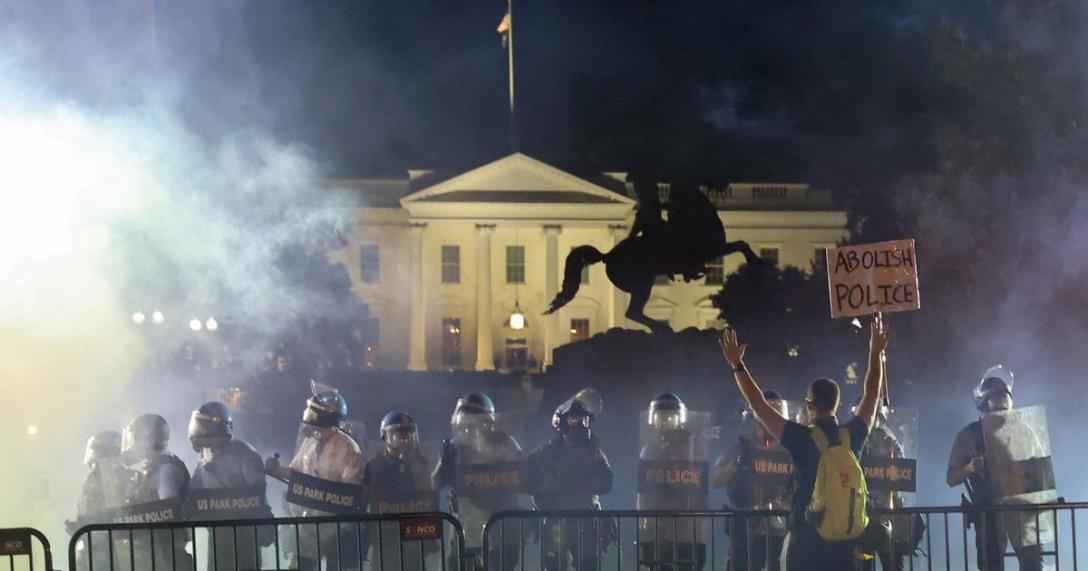 IMPORTANT:
This post contains the views of my wife and I in regards to the death of George Floyd, the resulting tension in our country, and what we believe is a necessary escalation resulting from the increasing police brutality and racism all across the United States of America.

We feel that we can no longer, in good conscience, remain silent on this topic. We cannot, and will not, allow the country that we live in to continue to crumble around us. The safety and security of our family, friends, and our fellow citizens demands that we speak out, even if it is only so that our children, and those that know us, can see that we were willing to stand against tyranny.

Thank you so much for your time. We hope what we write here resonates with everyone. Thank you all very much for reading.

A deadly pandemic, brush fires across Australia, a hotly-contested American election year… there’s so much that historians and educators will brush over in the school lessons. There’s only so much time in the day! There will be one talking point, however, that all of us will discuss time and time again. The day George Floyd died at the hands of police officers in Minnesota.

This kind of case isn’t new. The wrongful deaths of minorities in the United States stopped being uncommon a long ago. In fact, when I first saw the article of someone being held down until they suffocated, I assumed it was an article about Tyrone West. When I thought longer, I realized it must actually be about Freddie Gray.

I was wrong on both counts. George Floyd was a new victim in 2020. I couldn’t help but feel like I had lost count at this point. This death was fresh after the murder of Breonna Taylor, who was killed in her own home by police after they broke in (she wasn’t doing anything wrong… they were at the wrong house). And that incident was also fresh on the minds of Americans in the wake of Ahmaud Arbery‘s murder.

Of course, that’s the entire point.

After years of calls for reform… where are we? No closer to a solution, not by any means, and we’re left to wonder… can legal action fix this? Or does it take something more drastic? It’s obvious now that many feel action is the only solution.

In 30 years, teachers and students will discuss the events that came after Floyd’s death. They’ll discuss the peaceful rallies, the no-so-peaceful riots, the looting, and especially the aggression from police that is being captured all over the country.

In a time when police officers should be stepping back, thinking about their role to protect our society, and trying to find a way to dispel the oppression that has led to this moment… they instead appear to be putting all their energy into continuing to silence the voices of those that speak out.

A few bad apples is what you might hear them say. There are so many good police officers out there too. Perhaps that’s true, but now more than ever, those good police officers have a burden to carry. They must keep their fellow officers in line and build up everyone around them, or else we might never be able to trust them again.

In the classroom of the future, only the teacher and the students will be able to see the results of that demanding task. I hope they’re up for it. I hope the good police officers are good enough.

Likewise, in 30 years, there will be classroom discussions about the moral grounds of the riots that followed the protests. There will be comparisons to the Baltimore riots of 2015, and even the Occupy Wall Street movement. Some will question if the riots had to happen, and others will wonder if they were the only option left for an oppressed minority that could no longer find any ground to move in the legal space.

And it’s on that note that we reach what I want to discuss.

I think, in the classroom of today, a clear example of change has already occurred, and I want to share it here.

It all starts with the Confederate Soldiers and Sailors monument in Birmingham’s Linn Park.

The monument was a remnant of a very unfortunate part of American History. It has served as a reminder to the African American population that many still glorify the Civil War, and the those who died in an attempt to keep African Americans in chains.

In 2016, as racial divides were already being spearheaded, an effort began to gain traction in the United States to remove Confederate monuments and statues from public venues, and instead relocate them to Civil War or American History museums (where they belong).

Petitions were signed, leaders of government were called upon to act… it was a moment we could have been proud of in the 21st century.

Instead, when the leaders did act, it was only to further oppress.

In 2017, Alabama decided it wasn’t ready to embrace equality. In response to the request that monuments be relocated, the state instead passed a law, titled the “Alabama Memorial Preservation Act”. The state government made it illegal to relocate historical monuments from public property, assuming they had been there for 40 years or more.

In Birmingham, the “Soldiers and Sailors” monument became protected by a brand new law, passed specifically in retaliation against those that sought a change for the better.

The monument, a proud salute to oppressors of minorities, had to stay.

Realizing he was legally prohibited from removing the statue, Mayor William Bell ordered the monument hidden behind temporary displays. This would give the city time to decide how they could handle the situation.

The State Attorney General responded by filing a lawsuit against Birmingham.

Fun fact: the city ended up being forced to pay a $25,000 fine, ordered by the Alabama Supreme Court, because they dared to hide the monument.

African Americans, and all others that supported the removal of these statues, were told that their voices didn’t matter, and new laws were put in place just to limit their ability to impact change in this country.

There was no legal option to do something as simple as remove a controversial statue. Minorities would just have to live with it. They would have to walk their kids to school each day, reminded over and over that the men honored by that stone tower had died in a vain attempt to keep their forefathers enslaved.

By now you might be wondering why I’m even rambling about this one monument. Well, I’ll tell you. It’s because, just a few nights ago on May 31, 2020, protesters arrived at Linn Park to do what the Alabama Supreme Court said they could not. No matter the cost, the monument was coming down.

In response, and without injury, Birmingham Mayor Randall Woodfin vowed to have the monument removed. Just a single day later, on June 1, the monument was being taken down.

Teachers in 30 years will show students that riots, protests, and civil unrest can and do help turn the grinding gears of a system that, right now, seem intent on suppressing the freedoms of minorities in this country. They’ll remind their class that there are those who take advantage of these tumultuous times, and they are an unfortunate part of the risk involved with being forced into these situations.

It will be in the wake of these riots, when the world is paying attention, that we must define and document how we want our police to behave and what freedoms we can hold. Hopefully we can do that equally empowered to stand with one another, shoulder to shoulder, regardless of our own backgrounds, in a way that we have only talked about in theory before.

Meanwhile, it’s hard to see the positive in all this. The United States government has spent the last four years fostering a relationship of hate and divisiveness. Our President retweets videos that claim his political rivals should be dead… his followers run over protesters with cars, and we have no shortage of rhetoric that reminds us we should fear anyone that is not like us.

While we see George Floyd’s death as the final straw that broke the proverbial camel’s back, it will be up to historians to decide what really got us where we are today. It feels like we have fallen so far, from the first African American President elected in 2008, to near-daily reports of innocent lives lost, while every sunrise brings with it more white supremacy and nazi rhetoric from sea to shining sea.

My wife and I have never felt so helpless or concerned about America’s future.

A man wearing a red hat claimed he would “Make America Great Again,” but the other night we watched him hide in a bunker while flames lit the night sky and the lights on the White House turned off, abandoning us all. While I understand the lights go out at the White House at 11PM every night, and this was not likely the result of the President’s actions, the symbolism was not lost on the American people. The lights went out, the Oval Office was silent, and the country longed for a true leader.

The next day we watched that same man as he ordered the use of force to assault protesters so that he could walk to church. Once there, he held up a bible, as he put it, not his bible.

According to Mariann E. Budde, the Episcopal bishop of Washington: “He [Trump] did not pray. He did not mention George Floyd, he did not mention the agony of people who have been subjected to this kind of horrific expression of racism and white supremacy for hundreds of years.  We need a president who can unify and heal. He has done the opposite of that, and we are left to pick up the pieces.”

On that note, I leave you with the words of an American President that I believe is worth listening to in these daunting times.

If we are to keep this republic, we must capitalize on the movement that has kicked off across our country.

We must work toward establishing a clear definition of right and wrong, because our future, the children 30 years from now… they’re going to know what we did, and they will hold us accountable.