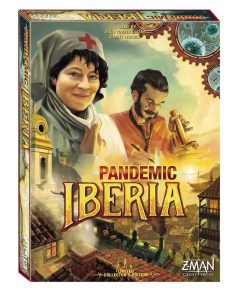 During the 2016 holiday season, we were gifted with several family board games. The most important of which was Pandemic Iberia.

Pandemic Iberia is a standalone game, which means you can just grab a copy and play away. On that note, I highly recommend that any fans of Pandemic pick up a copy of this game.

For veterans of Pandemic, the game isn’t fundamentally different from before. You still get assigned a role, take four actions, draw cards, and perform infections. One of the biggest changes is that you can’t eradicate any of the viruses, so you’ll always be adding new cubes to the board, which is a big change of pace from the original and one that prevents you from resting until the game is lost.

Meanwhile, the game is set in the Iberian peninsula during the 1850s. As a result, you lose planes in exchange for trains. The only problem is that you have to build the railroads before you can hop across the map. These can be very helpful, especially if you get the right role (here’s looking at you railwayman), but not being able to simply jump to a location can feel rough at first. Soon enough, however, you’ll be riding the rails all over the Iberian peninsula.

The real problem is winning.

I don’t know about others, but I’m starting to think Iberia is cursed! We’ve had the game for almost a year now and we’re still losing every time we play, even on the EASIEST difficulty! We’ve tried a variety of roles, but the politician never seems to get drawn, which has me thinking it might be the hand of fate that keeps dealing us heavy blows.

Ah well, regardless, we’ve had the game for almost a year now and we really do enjoy playing it with company, even if the outcome is that we all die to overwhelming viruses.

Buy Pandemic Iberia on Amazon, or at your local game store!