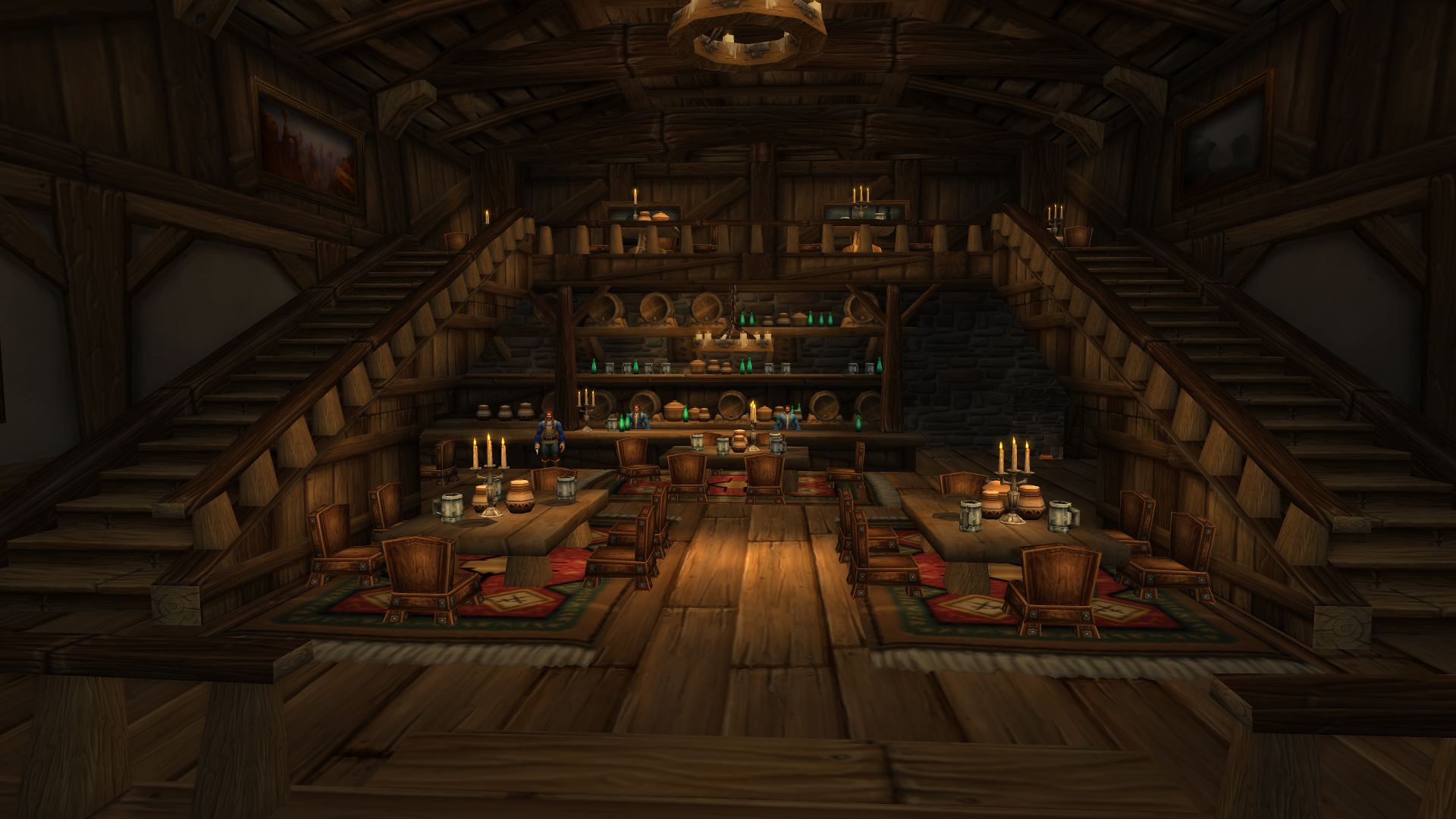 Maron Sepher looked like he belonged somewhere else. He wore clothes that he clearly found comfortable, he ate food that he liked to taste, and he liked to laugh. Most importantly, he was nothing but kind. Our first meeting in the Blue Recluse lasted six hours. He told me about my mother, my father, about the house I owned and the land where I would have been born and raised if the First War had never come.
Uncle Maron gave me identity. He made my mother and father into real people with lives of their own that were cut too short for reasons that would never make any sense. By the time I had finished my dinner in the Inn, I felt like I knew what it meant to be Sionis Sepher of Stormwind.

“So you two just came in today?” he asked, directing his question to Sonea, who had been mostly quiet during dinner.

“I’m so glad Sionis ended up with you, Sonea. I mean, what are the odds he’d end up with someone that knew his own mother?”

Despite all the noise in the Inn, I heard an audible gasp from Sonea.

“You knew my mother?” I asked.

Maron squinted as he heard my words and then fired a cruel glance to Sonea. “You didn’t tell him?”

“Why wouldn’t you tell-”

“He was young and scared,” Sonea stammered. “I didn’t… look, I didn’t want to paint the wrong picture.”

“So you just ignored that you knew her instead?” I asked.

“Obviously I wasn’t ignoring it,” she rebutted. “I was waiting for the right time.”

I stood from the table and slapped down a piece of bread. “Uncle Maron, do you mind if I stay with you for a while?”
Maron gave a nervous glance to me and then back to Sonea, but finally nodded in approval. “I suppose you don’t have to ask. The mansion is yours after all.”

I stormed out of the Blue Recluse and waited for Maron to follow me. He did, reluctantly, but not before he took a moment to talk with Sonea alone. When he did join me, the two of us made our way to the stables so we could get a ride to the Sepher mansion.
As we were walking along the stone path I saw that my Uncle was very uncomfortable. It wasn’t his fault. Lady Sonea had brought me to visit with him and now I was coming to stay at his place. I knew we were related, but that was likely unexpected no matter how much you prepared yourself.

“I’m sorry,” I said. “I have money now. I could stay at an Inn for a few nights if you aren’t comfortable with me coming home.”

“It’s your home,” Maron said again. “You’re not staying at an Inn.”

“You seem uncomfortable,” I said honestly. “I don’t want to barge into your world.”

“No, it’s not you, it’s that little fight that just happened,” Maron admitted, his own honesty coming through with his words. “Sonea’s a wonderful person. She’s the one that took the time to set all this up and get you back home. She and your mother… they didn’t get along. In fact, before Sonea left for Dalaran they had a huge falling out. What with the war and everything, I didn’t take that into consideration.”

“So what? She just pretends my mother didn’t exist?”

“I don’t know,” Maron said with a shrug. “I know a few people I don’t get along with and I see what she means about painting the wrong picture. If I told you about one of the southern field farmers you’d hate his guts too, but that probably wouldn’t be fair to the farmer.”

“Was my mother a bad person?”

My uncle laughed wildly. “No, she was wonderful,” he assured me. “The truth of the matter is, so is the farmer of the southern fields. That doesn’t mean he and I get along.”

“So you think she was worried she’d make me think negatively of my mom?”

“If you don’t have anything nice to say, sometimes saying nothing is the best option.”

“Fair enough,” he replied with a slight grin. “We’ll head to the mansion and you can have the night off, but it’s best to put these issues to bed as soon as possible. You’ll want to come talk to her again in the morning.”

Less than one day since we had met and my Uncle already felt like a father.

When we reached the stables I found several beautiful horses waiting in stalls that were ornately decorated with the Sepher name. I also caught sight of a certain young black stallion that I immediately recognized as the one from Dalaran. As Maron was taking the horses from their stalls, he noticed that I was looking to the young creature.

“No,” I replied. “The stable master in Dalaran said there is something wrong with it.”

“Come along, Sepher,” Maron said. “We should be getting home.”

I did as I was told and jumped up on the horse that Maron offered to me. It was taller than Ghost, but more slender too. I felt like a knight upon its back. We left the stables and made our way out of New Stormwind’s main gate that would take us along the northern edge of Elwynn Forest and into Northshire.

We rode in silence for a long way before Maron spoke again.

“So, what do you know about your grandfather?”

“He was a powerful mage; a clever man too. I used to listen to him tell me stories of his grand adventures all the time. Your father never cared for any of it, mind you, but I was captivated.”

“He was in the Kirin Tor, right?” I asked, already knowing the answer.

“Yeah he was,” Maron replied. “He hated when he had to go to Dalaran to help with Kirin Tor business. Most of the time he was working with magic in ways the Kirin Tor didn’t approve.”

I thought of the warlocks in the Mage Quarter and panicked. “He dealt with fel-magic?”

“Oh, no, none of that dark stuff. He was a fire mage,” Maron said. “He was one of the best fire mages I’ve ever seen. I’m probably a bit biased, of course, but I stand by my statement. Your grandpa could heat a furnace from stone cold to red hot in a second. He could light a candle from a hundred yards away without flinching. He was, in short, amazing.”

“Heating furnaces and lighting candles sounds like beginners stuff,” I said. “Could he call down pillars of fire or perform the magical flourish called the dragon’s breath?”

Maron laughed. “You have it backwards with fire, kid. Fire is an angry and powerful element. Any mage can burn down a village with fire magic, but it takes a truly skilled fire mage to burn through one enemy in a straw house without setting anything else ablaze.”

“Of course, he could also do the Dragon’s Breath, if he wanted to be showy.”

I smiled. I liked being showy too.

“It takes a lot to let the Kirin Tor approve you for fire magic lessons. You have to become a skilled frost mage first and even then I doubt they let you start without some hard lessons in arcane magics.”

“Your grandfather didn’t perform his first spell until he was fifteen,” Maron said with a grin. “You’ve got a headstart on him.”

“What about dad or you? Did you guys use magic?”

“Oh no,” Maron said. “That’s not my thing. Your dad, I think, had some level of ability. He was a damned good gambler and his luck was uncanny. I suspect he had some kind of secret connection that maybe he didn’t know about!”

Maron gave a deep laugh and I couldn’t help but laugh with him.

The rest of the way home we shared stories of the past few years and with each new tale I grew more comfortable in a way that I had not thought possible. It was a feeling that would carry forward for a great many years.