“A Mary Sue is an idealized and seemingly perfect fictional character, a young or low-rank person who saves the day through unrealistic abilities. Often this character is recognized as an author insert or wish-fulfillment.” – Wikipedia

In other words, a Mary Sue is generally a character who should not be able to accomplish tasks, and not only are they able to do so, they are able to do so with amazing results. So, for example, a Community College student who is focused on Journalism hears about a chemical formula, and somehow comes up with a better formula, much to the surprise of the scientists that have been working on it for years.

That character, the student, should not be able to understand advanced formulas, much less build upon it and outperform seasoned veterans. That’s where the character falls apart and becomes the “Mary Sue”.

That is not to say that your journalist student cannot be an experienced chemist who left the field years ago and is drawn back in later in life, but the importance here is context. If a character is given context for whatever skill is being utilized, it can often resolve any concerns of sue syndrome, as long as these fit realistically in the character backstory.

Mary Sue: A journalist college student diffuses a bomb in a tense situation by cutting the right wire. He explains how he made the decision, but no backstory explains how he could have known to do so. In reality, he’s young and inexperienced and never has he been around bombs. It isn’t realistic that he can diffuse it!

Not Mary Sue: A grizzled veteran that used to be on the bomb squad ends up becoming a journalist back home in the states. He gets caught in a tense situation and is forced to disarm a bomb like he did in the past.

This is particularly important in Science-Fiction or Fantasy genre stories where magic is involved. It blurs the lines of the framework because magic often makes impossible things into possible things.

So, with the concept squared away, let’s talk about Rey from Episode 7.

“The first time Luke tried out his lightsaber he was awkward and struggled with Obi Wan’s initial tests. The first time Rey picked up a lightsaber, she kicked the butt of Kylo Ren, the main villain of the movie without any training.”

Comparing Luke and Rey is probably the first mistake, especially when it comes to combat.

“Luke had initial pilot experience which helped him in the final battle against the death star. Rey had no pilot experience, yet the first time she flew she was able to do crazy aerial maneuvers through small crevices.”

Well, here’s where things get interesting.

In the Star Wars universe we accept that the Force guides people through these events. The Force is literally with them. Episode 4 shows us very clearly that the destruction of the Death Star happens because the Force was with Luke on his run through the trench. It’s fairly safe to say young Rey had the Force guiding her as she flew the Falcon in Episode 7.

Additionally, with recent insight into the Force from Rogue One, it’s also possible to say that Luke and Rey may not have been hit by lasers if they’d tried. If the Force wills these events, are they simply vessels for it? 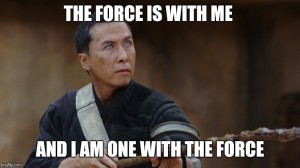 “Luke’s initial forays into the force where laborious. Rey learned mind control on her own out of nowhere and successfully manipulated a storm trooper.”

This is actually a fallacy for a few reasons: 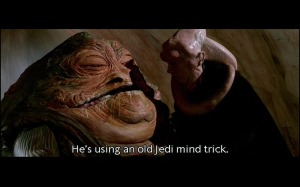 “In the new trilogy, we already know Rey can whoop Kylo Ren. So what’s the training with Luke for? So she can beat him harder the next time?”

A few points on this one too:

At the end of the day, Rey’s character doesn’t fit in the Mary Sue framework. She hits a few checkmarks, sure, as does Luke or Anakin Skywalker in their respective trilogies. It would be hard for a character that can literally manipulate our thoughts and physical universe to not at least hit a few of the indicators of an overpowered individual.

The majority of issues around Rey appear to revolve around her exponential growth of power with the Force rather than a slow gain of power through years of meditation and training. To that I say, remember that Luke defeated Darth Vader (who failed to kill Luke in the trench) and blew up the Death Star just a day or two after learning about the Force.

If you still think all of this is nonsense and that Rey really is a Mary Sue, feel free to comment and let me know why! Most importantly, may the Force be with you all. Here’s to the future and the excitement that will be Episode 8!!!