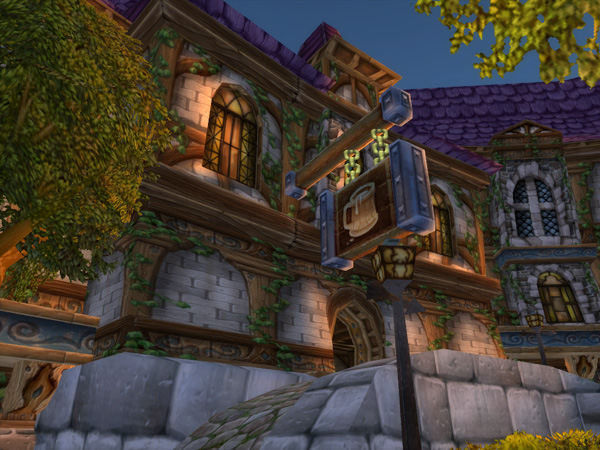 The weeks following the incident in Grand Hamlet were rather difficult for me. I was met with a lot of mixed emotions. After all, Varan Bell had just wanted payment for his work. I imagine that many of the Defias Brotherhood simply wanted credit for their efforts, but their desire for recognition was leading them down a dark path. If I had spoken out now, it would look as though I supported the man who had simply kidnapped my Uncle. If Varan had released Maron of his own will, things would have been different.

Likewise, my thoughts on Kaellax were mixed as well.

Having returned to Stormwind I pointed out her great efforts to help, but the magi didn’t like hearing about the warlock’s skills in battle and by the time the story of the assault had circled back around to me, her role had been reduced to nothing more than a mention of attendance. It was disheartening.

I made my way to the Slaughtered Lamb to tell her that I would continue to tell the story with the true details, but with that same wicked smile she simply told me not to worry about it. The Kirin Tor would reduce her role because it was too painful to admit that dark magic could be used for good. I encouraged her not to give up and told her I’d do my best to prevent that, but within a few days I realized she was right.

Warlocks were allowed in Stormwind, but they weren’t accepted.

A warlock saved my Uncle and now what many considered evil, I considered to be not so black and white.

I visited with Varan in the stockades too. I made sure he was getting his share of food and water, but he didn’t have anything to say to me. I guess I can’t blame him for that.

So life got back on track and my lessons at the mage tower continued. They taught me the finer points of frost magic, and I listened for their sake, but after the attack against our convoy my mind was settling on a certainty that fire magic was my future. Lady Sonea rejected the idea whenever I dared approach it, but all of that changed when I decided to make one more stop at the Slaughtered Lamb.

“You have my money, woman, now give me what I’m owed!”

The voice was gruff and dirty. I could tell before I even entered the tavern that it was someone I’d rather not meet.

“Just because you put a bag of gold on my bar doesn’t mean I owe you anything,” Kaellax replied. “Now get out of my bar.”

“I’m not leaving until I get what I want.”

I had just crossed the threshold when I saw a dirty old soldier reaching over the bar and grabbing Kaellax. She looked concerned, which I thought strange since she should have been able to overpower him with magic.

When the man easily pulled her up onto the bar and she let out a scream, I knew something was wrong.

“Hey,” I shouted. “Hands off the innkeeper!”

The older man looked toward me for a second and then chuckled. “Get on to your own tavern, mage,” he growled as he turned his attention back to Kaellax. “I’ve got business here.”

“If you don’t release her you’re going to regret it.” I blurted, stepping toward them.

The man laughed and reached to undo Kaellax bodice.

Rage filled my body and I reached up to smash this man’s face in with a block of ice, but I was shocked when nothing happened.

Fear gripped me, but I realized the man wasn’t paying any attention to me. Kaellax was struggling against his hands and I had to act fast.

Abandoning the notion of magic, I reached for the nearest chair and raised it over my head in a sweeping motion. The old man was so caught up in his filthy lust that he didn’t even see it coming.

I had intended to break it over his back, but my aim was off. Instead, I caught the side of his head with one of the chair legs and that sent him reeling off the counter with an awful growl of surprise and pain. Kaellax was up in a flash, standing next to me and looking as ferocious as an untamed dragonhawk.

“He’s got a nullification stone,” she muttered to me. “No magic.”

“So how do we deal with this one?”

“Old fashioned way,” she said pulling a dagger from a hidden holder above her ankle.

We waited for for the old man to emerge from behind the counter, but after a few seconds it became obvious that he wasn’t getting up from the blow I’d delivered. I was rather thankful for that, as I was fairly certain Kaellax would have stabbed his eyes out if he’d dared stand up.

“So what do we do with him?” I asked, looking over the unconscious criminal.

“Can you teleport him into the ocean?” she asked. “I guess I could throw him off the docks tied to a heavy rock.”

Kaellax looked shocked. “You just don’t get it, do you?”

I nodded, thankful that she had agreed and quickly stepped outside, though not out of her line of sight, and shouted for the nearest guard.

After telling the story of the assault, I was introduced to the shock that Kaellax had displayed earlier. The soldier looked her up and down, looked to the old man on the ground, and then back to me.

“I don’t mean to call you a liar, mage, but are you sure that’s what happened here?” the guard asked. “After all, that’s an older gentleman.

Why would he have any business up here with a warlock.”

“There’s some spilled gold here behind the counter,” the guard added. “Are you sure this wasn’t a, uh, special transaction that you just walked in on?”

I reached for the nullification stone that Kaellax had fished off the man and chucked it outside of the inn. With a snap of my fingers, the old man vanished.

The guard was gone too.

“Oh no,” I said, panic bubbling up to replace the rage. “Oh noooooo.”

Kaellax laughed. “What did you just do, Sepher?”

“I just teleported them into the harbor,” I replied.

The warlock suppressed her laughter and turned to the door. “Well I guess we should go get them out so they don’t drown.”

“No, I’ll go,” I replied. “You stay here. The last thing we need is you getting in trouble out in the open.”

Before she could respond, I focused my energy and transported myself to the dock with a quick pop of magical energy.

The guard was submerged, but the old man was easy enough to find. I felt out into the water for their life force and locked onto them both easily enough. If only my teachers could have seen this work of mastery! The anxiety of accidental murder had spurred my abilities to new heights.

With another pop and fizzle, the soaked guard and old man appeared at my feet, coughing and gasping for fresh air. I was relieved to see them both alive, but when the guard got his footing he immediately came at me with a growl of anger.

I dodged his attack, his heavy armor made him slow and clumsy, and the water soaked wool wasn’t helping either.

“You’ll hang for this!” he said to me with a balled fist waving in the air. “You’re under arrest!”

A nearby crowd of individuals had gathered in the commotion I’d caused, and a few other guards joined the ranks. As soon as the soaked guard met their eyes they snapped to his aid and marched toward me. I thought about resisting. It would be easy enough. A quick teleport and I could be back home with Maron.

But people had witnessed my actions. They would know who I was.

So, against all my survival instincts I simply raised my arms out for the guards to lock me in chains. They did so with pleasure.

An hour later I was in the Stockades, and for a bonus they put me in the cell right next to Kell. He didn’t seem to care, but did acknowledge me with a deep nod when I first arrived.

My time as a prisoner was short-lived.

Word spreads fast among the nobles, especially when someone of high stature is taken in by the guards. Uncle Maron was at the stockades before the day’s end and he did not look happy.

“What’s the meaning of this?” he shouted as he waved a hand toward my cell. “Why was I not contacted when he was arrested?”

The jailer looked surprised by this sudden confrontation. “I wasn’t told to contact anyone,” he replied. “The mage is being held on charges of attempted murder.”

“A guard says the mage teleported him and an old man into the harbor with intent to kill.”

Maron frowned. “Who rescued them from the harbor?”

The guard looked at a loss for words, but added. “It was the mage.”

“So, he intended to kill them by rescuing them from the harbor?”

“Perhaps he had second thoughts,” the guard replied. “Regardless, he did teleport them into the water. He endangered both their lives.”

The guard’s jaw dropped for a moment, but he snapped it shut and scowled. “I don’t take orders from you, Maron Sepher.”

“No?” Maron replied. “Fair enough. I suppose you won’t be taking food from me either.”

“It’s a promise, soldier. I didn’t help rebuild Stormwind to watch the new guards take advantage of young people. He’s a mage and clearly this teleportation was an accident. Otherwise, grand jailer, why would the boy remain in that cell when he could simply snap himself to the tower?”

The jailer mulled this over for a moment, but seemed defeated. “I suppose we could release him, if you promise us that you’ll bring him to the Keep for his trial?”

The jailer hesitated for just a moment longer, and then nodded. “Yes, of course, no point in jailing him just yet.”

We walked home in silence. I wasn’t sure if Maron didn’t want to talk about it, or he was too mad to risk talking, but the second we got inside the mansion I got my answer.

“What did you do?” he snapped. “I want the full story. Every detail!”

“Of course,” I said honestly. “I’ll tell you everything.”